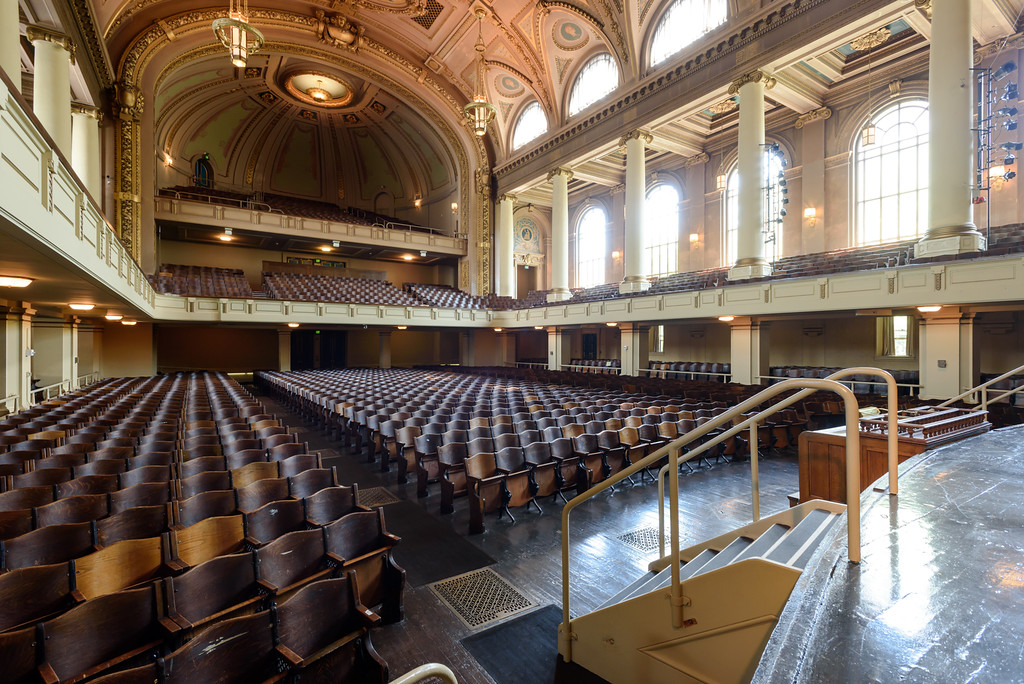 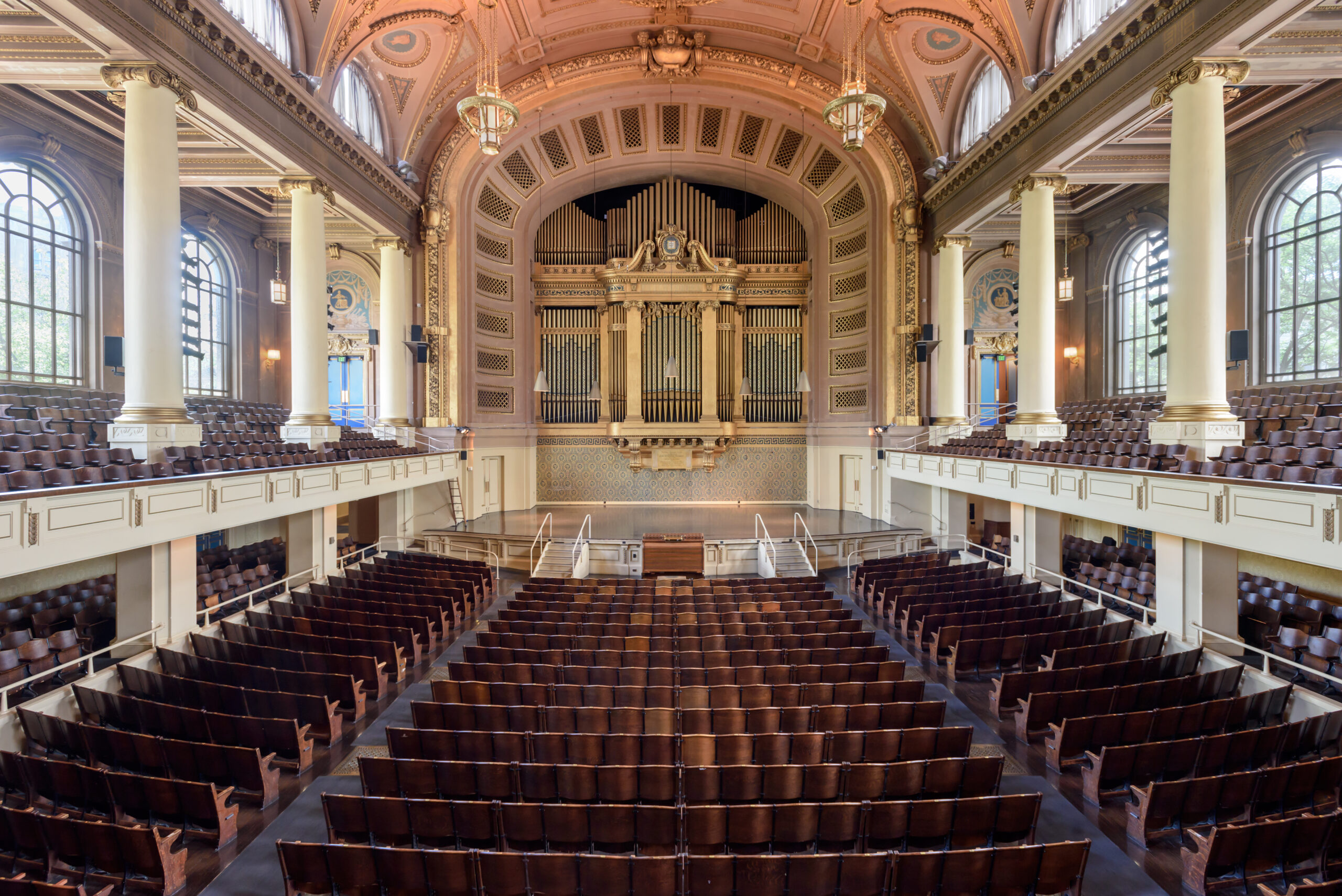 Orchestrating behind the scenes
On a campus noted for grand public spaces, few approach the stature of Woolsey Hall. Built in 1901 as part of the Bicentennial Complex, it is a part of every undergraduate’s life from the ceremonial first meeting at Freshman Convocation to the penultimate good-byes at Senior Baccalaureate. The classical proportions and decorative motifs were cast from the best Beaux Arts sensibilities of the time making it unique among its Victorian contemporaries and the later collegiate gothic neighbors. As a destination performance space, it is home to the Yale Symphony Orchestra, and the New Haven Symphony. It hosts prominent large venue events for Yale as well as the greater New Haven community throughout the year. The Muses gazing from the polychrome ceiling have witnessed freshman proms, major premiers of classical music, Janis Joplin, Jimi Hendrix and the annual thesis performances of the Institute of Sacred Music.

The hall was built for live performance in an era where the best and only recording technology was strictly analog and required a cranked gramophone to reproduce. Electric lighting was still a novelty, minimal, and utilitarian. The heating system though superbly quiet by any measure, could not offer the basic smoke protection we take for granted today. Over the century since it was built, needs evolved and Codes developed, but the infrastructure could not keep pace.

Among the points of resistance confounding modernization had been the organ. More than a simple performance hall, Woolsey is conjoined to the world renowned Newberry Memorial Organ. The hall and organ were built and rebuilt for each other, with the final iteration of the organ constructed in 1928. The visible pipes and console give no hint of the true extent of the organ’s “works” –the number and size of the voice chambers; the power and reach of the blowers or the exquisitely responsive electro-mechanical controls and registers that make organ performances here a unique musical experience.

Backstory
In 2009 CWA was selected to respond to a menu of code deficiencies in Woolsey Hall. Though no work touched the organ directly, tremendous effort was committed to identifying the diverse parties responsible for the organ in order to win confidence and develop a consensus “protection plan.” That plan would become part of the contract documents and allowed work to proceed with a high level of comfort for everyone involved. The mitigation strategies necessary to satisfy the code deficiencies ultimately extended to each part of the Bicentennial Complex and evolved into a six year in-depth relationship.

Context
Developing the scopes, solutions, and sequences was a study of orchestration in its own right. Woolsey is under the administrative control of three separate departments. It is scheduled for rehearsals- organ, symphony orchestra, and events sixty to eighty hours per week during the academic year, and twenty to forty hours during semester recess. Windows of opportunity were limited.

Nuts & Bolts
Challenges grew from a disparate menu of work items, a limited budget, and a strictly parsed schedule. Finishes needed to remain intact and work performed around the hall’s availability. Scope included new switchgear, panels, feeders, and cloth-covered branch circuit replacements. Smoke dampered separations were made where none existed. Accommodations for Media Services proved to be a code compliance problem of its own. Every performance that was recorded or televised created an exit management crisis with bundles of power and communication cables blocking doors and crossing egress paths. After an archaic concealed sprinkler head failed in the cavity of a basement ceiling an analysis of the sprinkler system, lead to its replacement. The Owner’s need to keep the existing seating coupled with the Code requirement for exit path illumination resulted in an innovative and economical lighting solution devised in-house. Chandeliers were restored and circuited to a new programmable dimming system.

What You Don’t See
Anything to distract from the beauty of the moment, the grandeur of the space, and the Beaux Arts detail. Massive skeins of infrastructure were threaded through the structure, behind the existing finishes. A theatrical grade dimmer controls the lighting. Media Services now plugs cameras, microphones, and speakers into discrete patch panels communicating with a dedicated control room. A pre-action sprinkler system protects the organ practice rooms. A state-of-the-art fire detection and notification system connects and coordinates the entire Bicentennial Complex. Consumable electronic components are located in rational clusters accessible for maintenance.