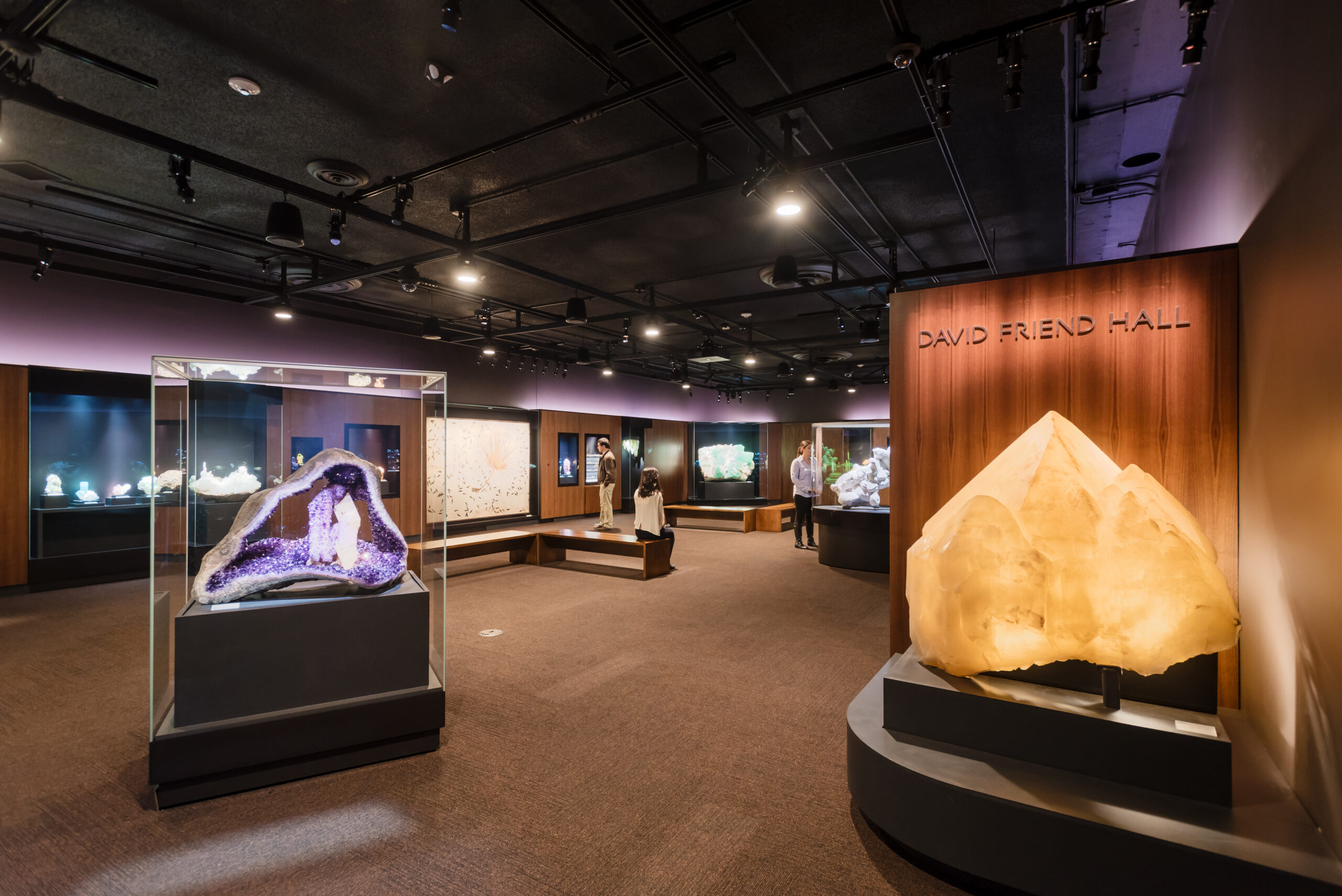 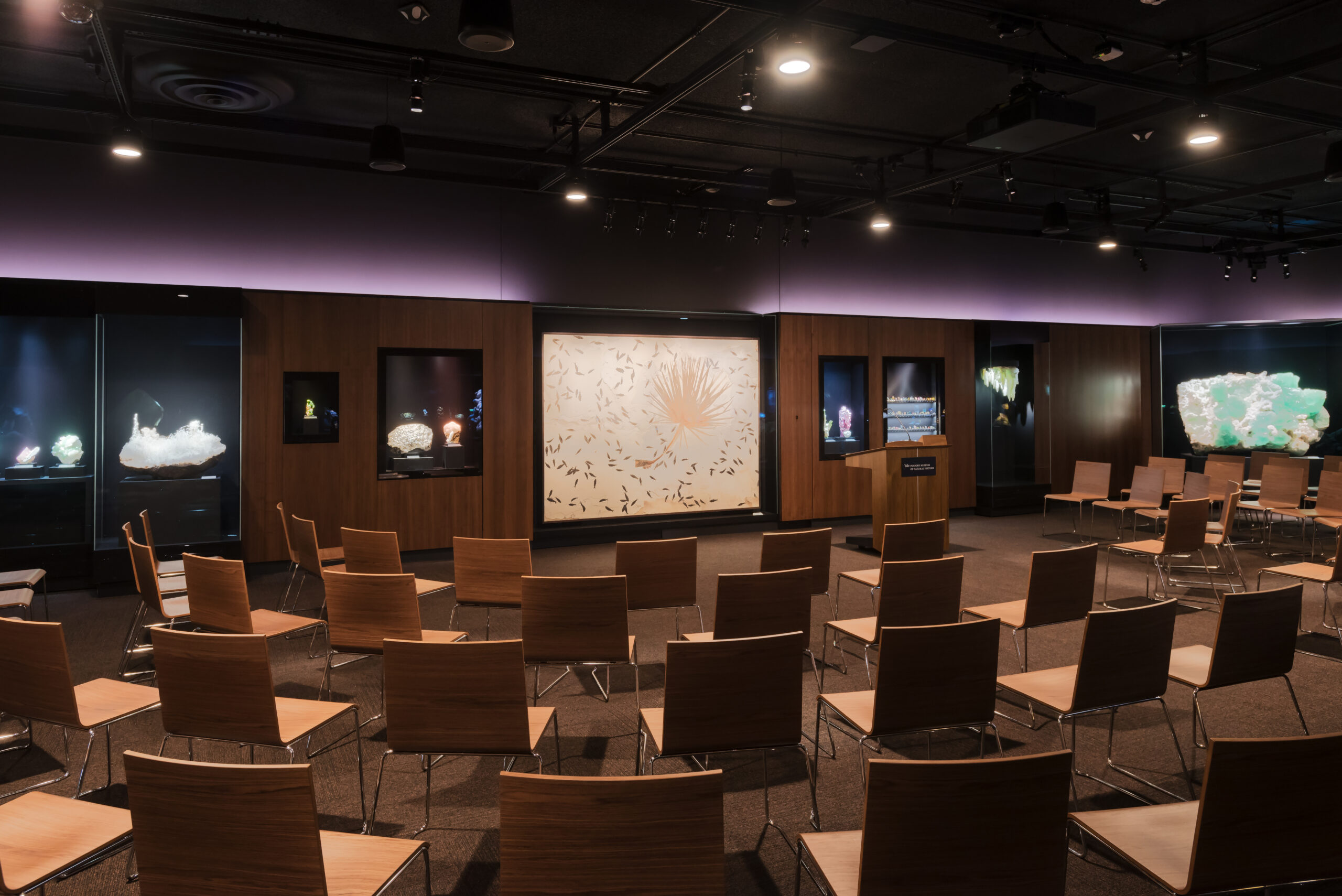 Rock star treatment
David Friend owes a lot to rocks. The new gallery at Yale Peabody Museum’s Hall of Minerals, Earth and Space is designed to pay them back, in part by inspiring a new generation of geological explorers who share his delight in the rock world.

Building on Friend’s experience, which features a youthful discovery of quartz crystals followed by studies in science and career in engineering, the idea for David Friend Hall was to spark interest in the natural world by captivating people with the beauty of its elements. Thus, unlike a traditional scientific exhibit replete with interpretive material, the guiding principle of this 2,300 square foot renovation project was to treat the stones like art: let the specimens shine like actors on a stage or, more aptly in this case, like rock stars. Because that’s what they are: a glittering collection of gems and minerals that wow people with their intrinsic gifts and charisma. So, the architecture fades to black. The lighting enhances the best features of each piece. The interpretation is left to the viewer. The experience is the thing.

“I call it a gemnasium, where your sense of wonder gets a workout”
– Dan Mims, Daily Nutmeg

“The new multi-million dollar, state-of-the-art gem and mineral gallery at the Yale Peabody Museum of Natural History is not about the intricate process by which minerals form, it about something more basic, easy to understand and ultimately more primal: beauty.”
– Erik Ofgang, Connecticut Magazine

“The Peabody Museum of Natural History is a pillar of the sciences… and visitors are in for a breathtaking exhibit of minerals and gems.”
– Bob Jones, Rock & Gem

Backstory
The Yale Peabody is a distinguished natural history museum. Its new David Friend Hall, which opened to coincide with the Museum’s 150-year anniversary, complements the existing Hall of Minerals, Earth and Space, adding a unique gallery to one of the nation’s oldest and most comprehensive collections of gems and minerals. Peabody exhibit designer Laura Friedman established a simple, if unorthodox vision that was rigorously embraced by the whole team: let the rocks to do the talking.

Context
The project involved the conversion of an 1960s-era Brutalist auditorium into a space that functions not only as a museum gallery, but also as a teaching and activity/reception space with relevant furnishings: benches, chairs, lectern, tables. The challenge was to make each of these uses feel natural — not too vacuous as an exhibit hall, not too crowded as a lecture hall and not too intrusive as a day camp or social gathering.

Nuts & Bolts
The upside to the space’s Brutalist genes? Plenty of concrete. While demolished for the new use, the fact of those original concrete block walls and slab floors served as an in-situ load test that proved the building was capable of supporting whatever load the weighty rocks and minerals might impose.

What You Don’t See
Anything that would detract from the gems and minerals on display: architecture, light fixtures, interpretative signage. Like a black-box theater, the ceiling features a pipe grid on which lighting fixtures are clamped and connected to a lighting control/dimming system. Exhibit lighting fixtures are virtually invisible, well hidden within finely crafted walnut cases, creating a luminescent glow that shows off the rocks and minerals. The crispness and color rendition of the lighting orchestrated by lighting designer Don Christiansen set a new bar in the Peabody Museum.

Best Use
“I call it a gemnasium, where your sense of wonder gets a workout.”
– Dan Mims, Daily Nutmeg