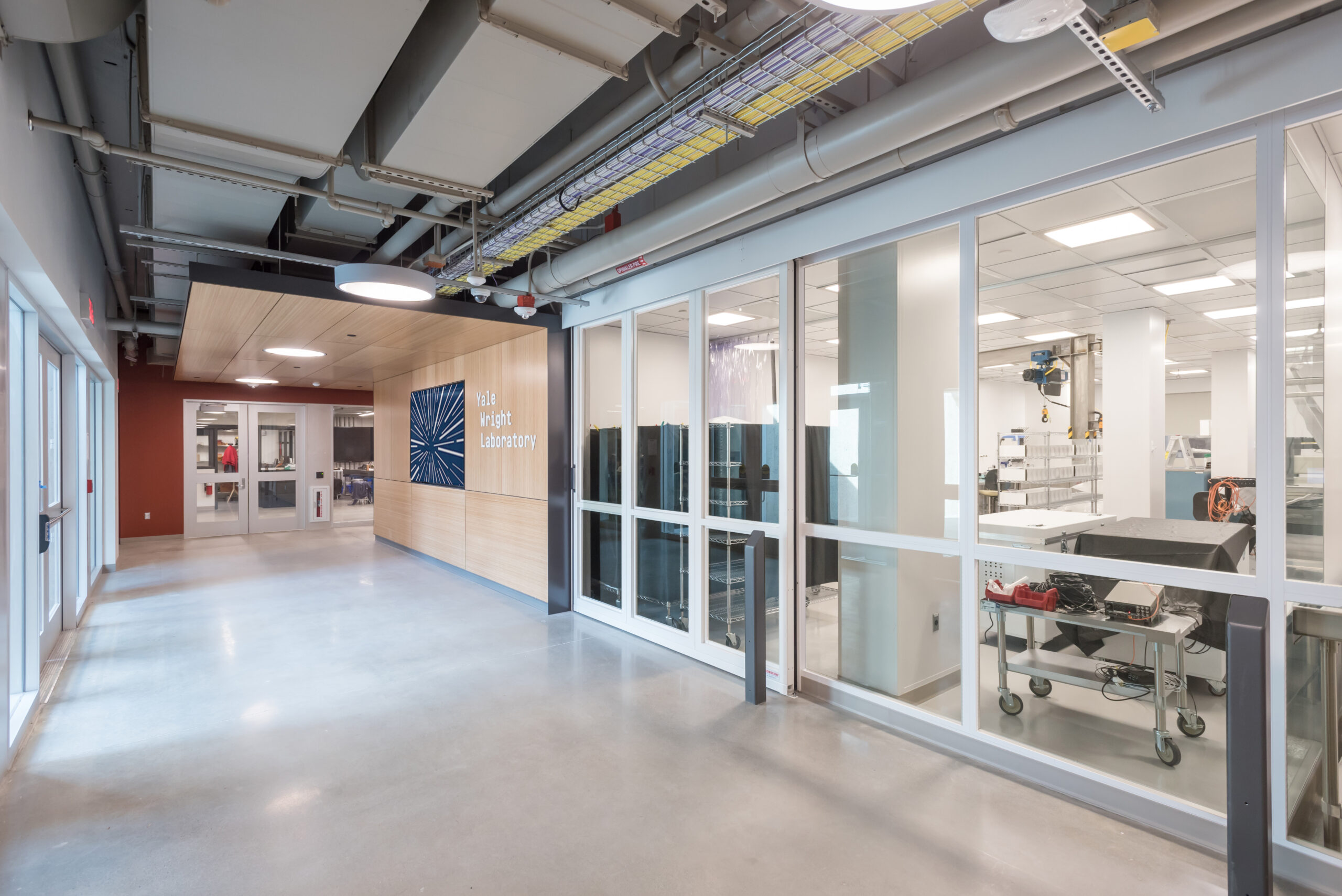 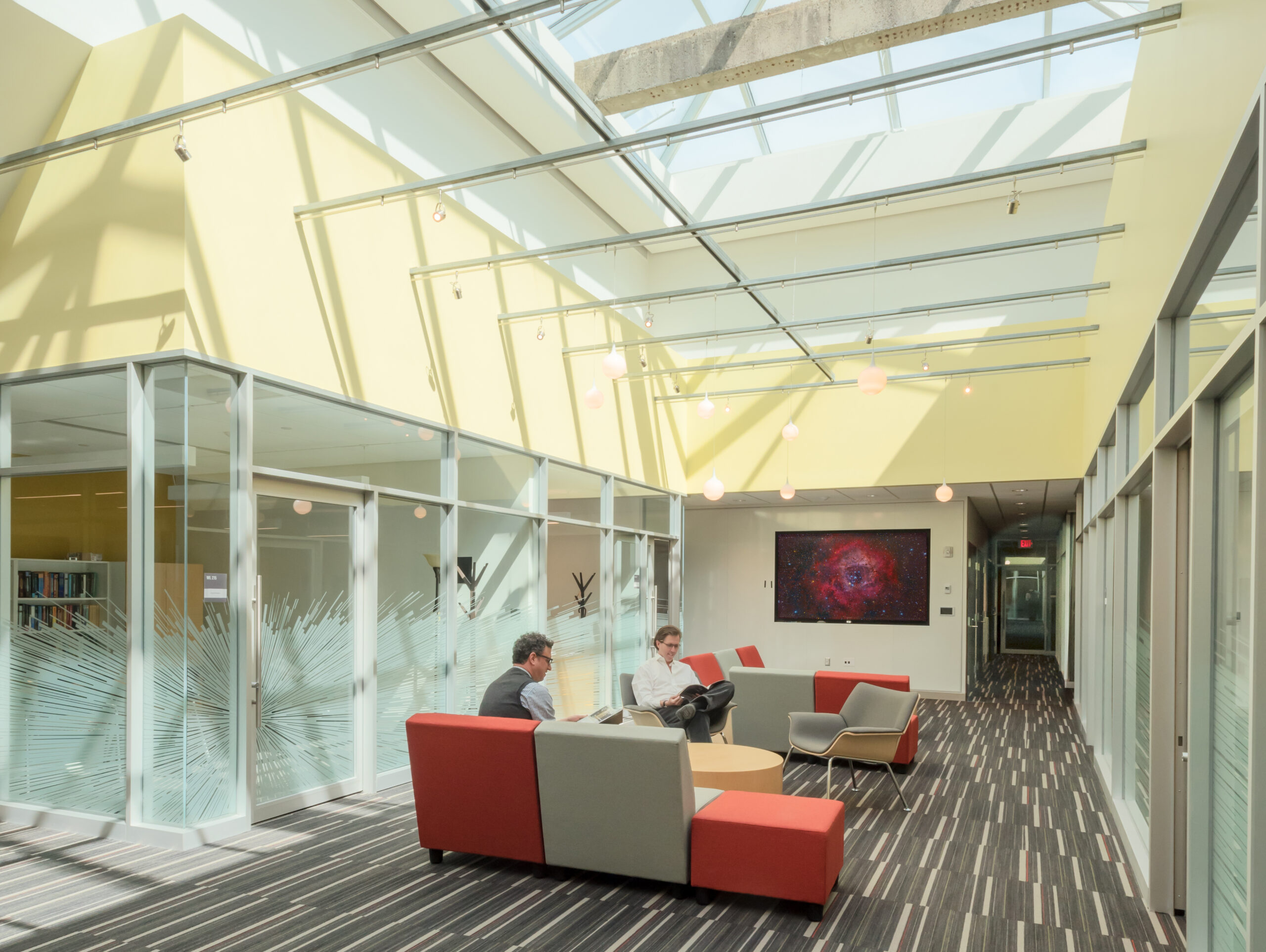 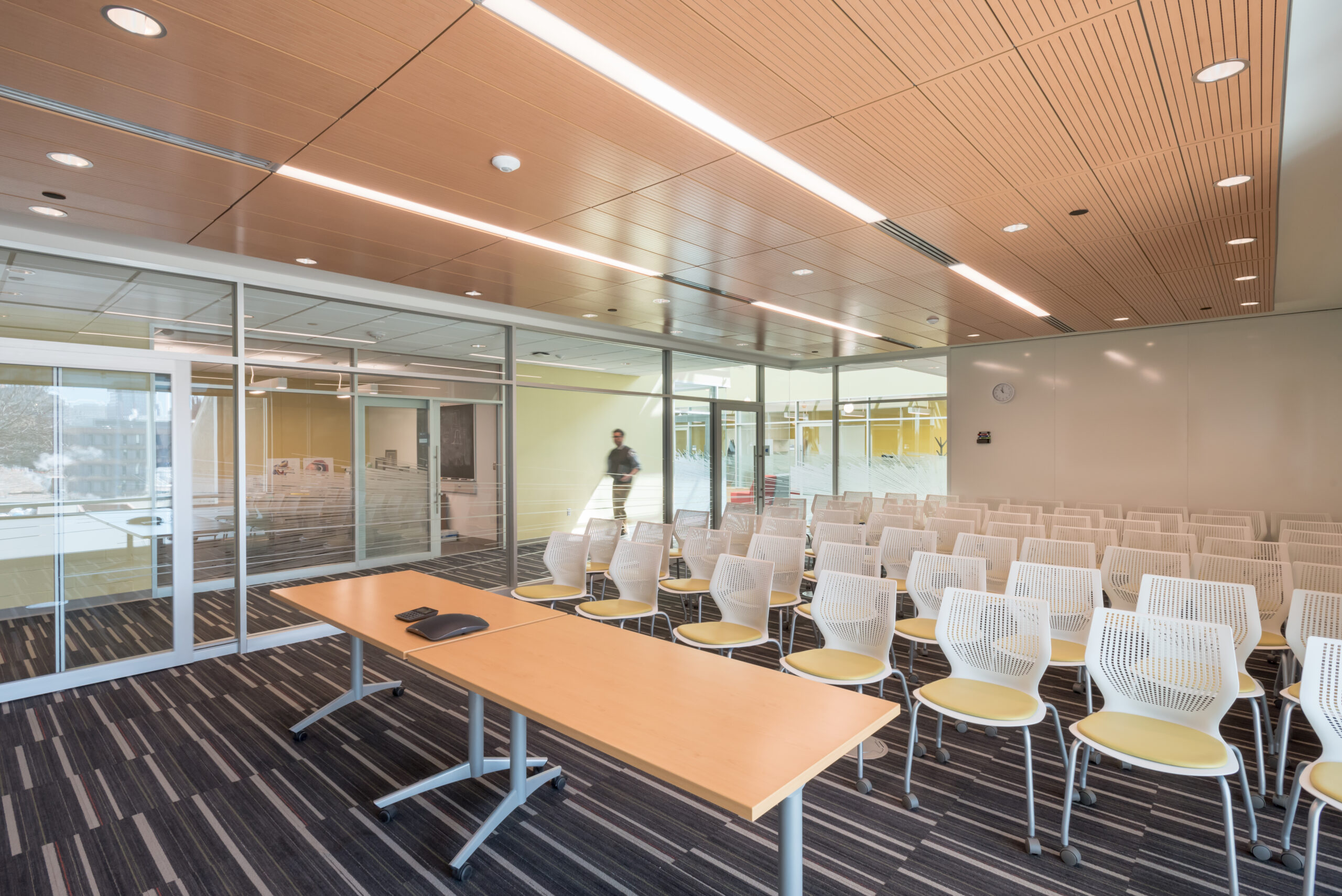 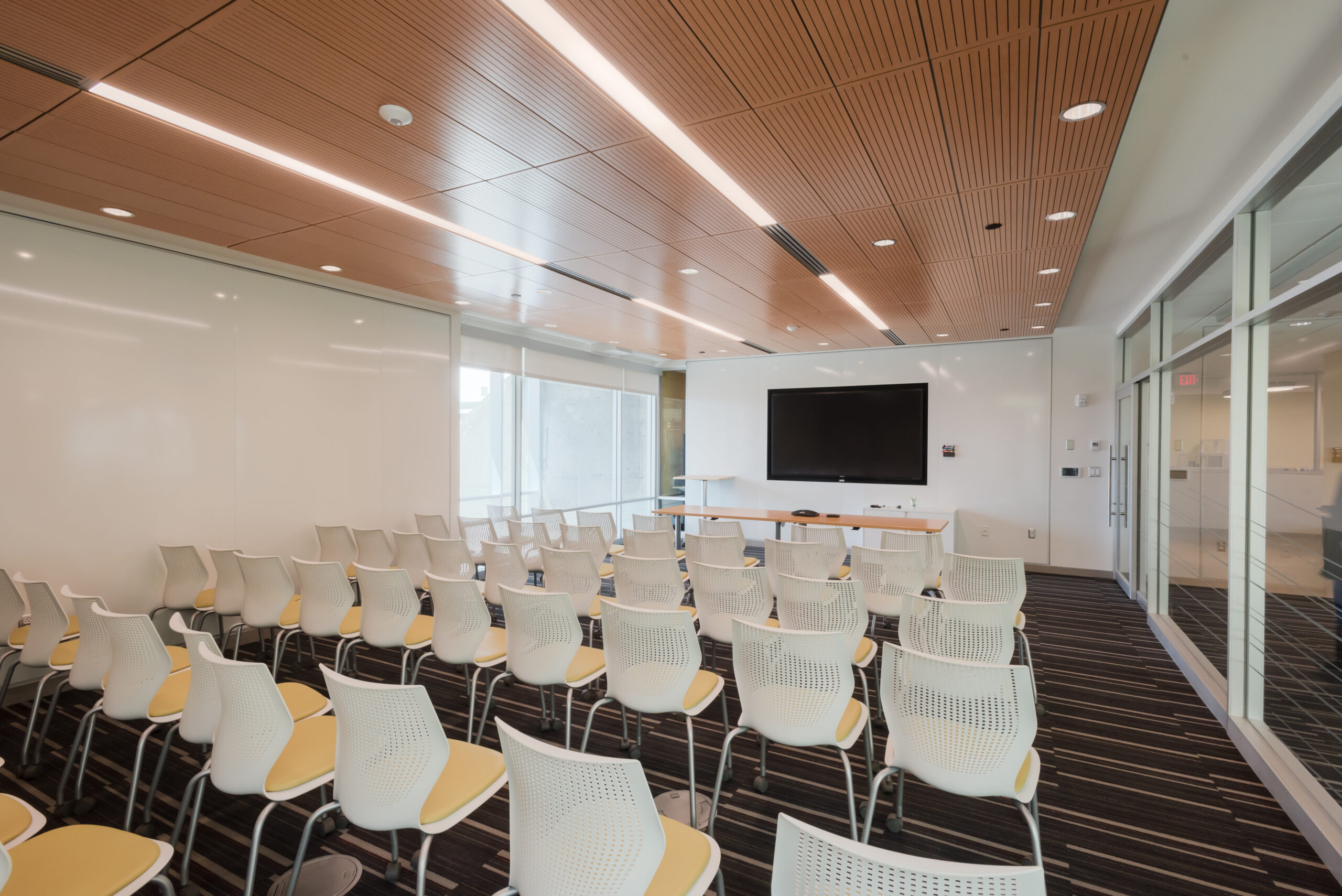 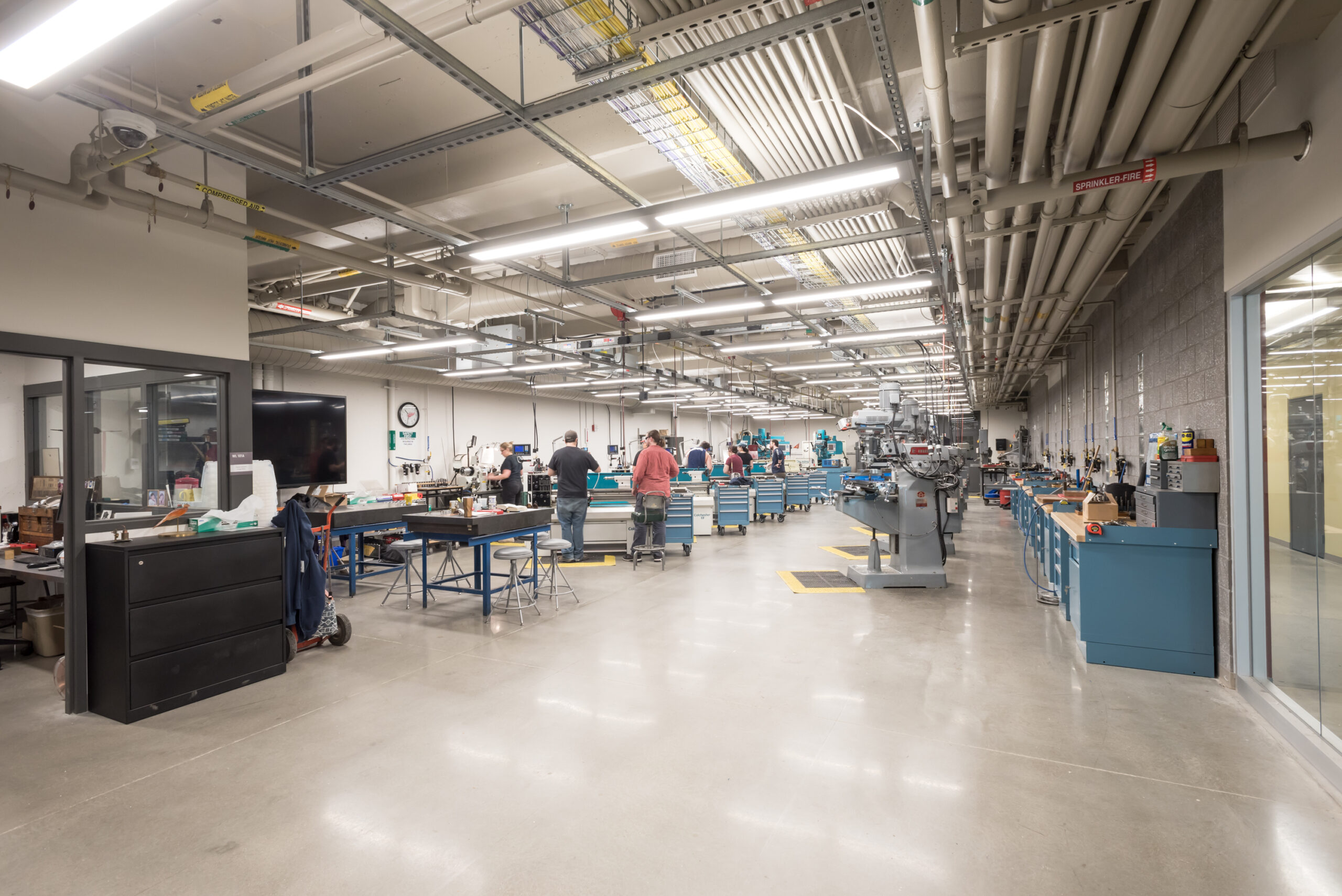 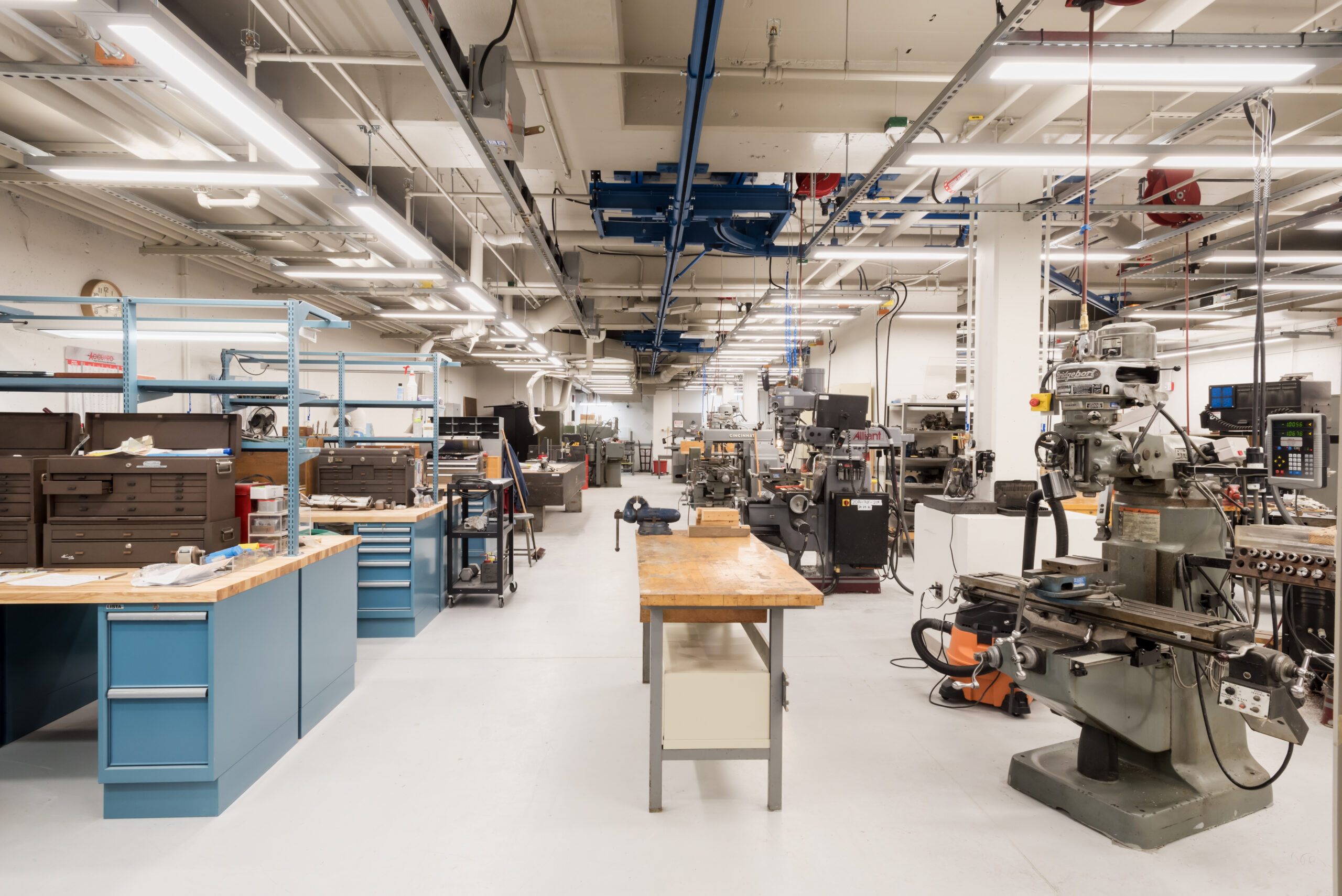 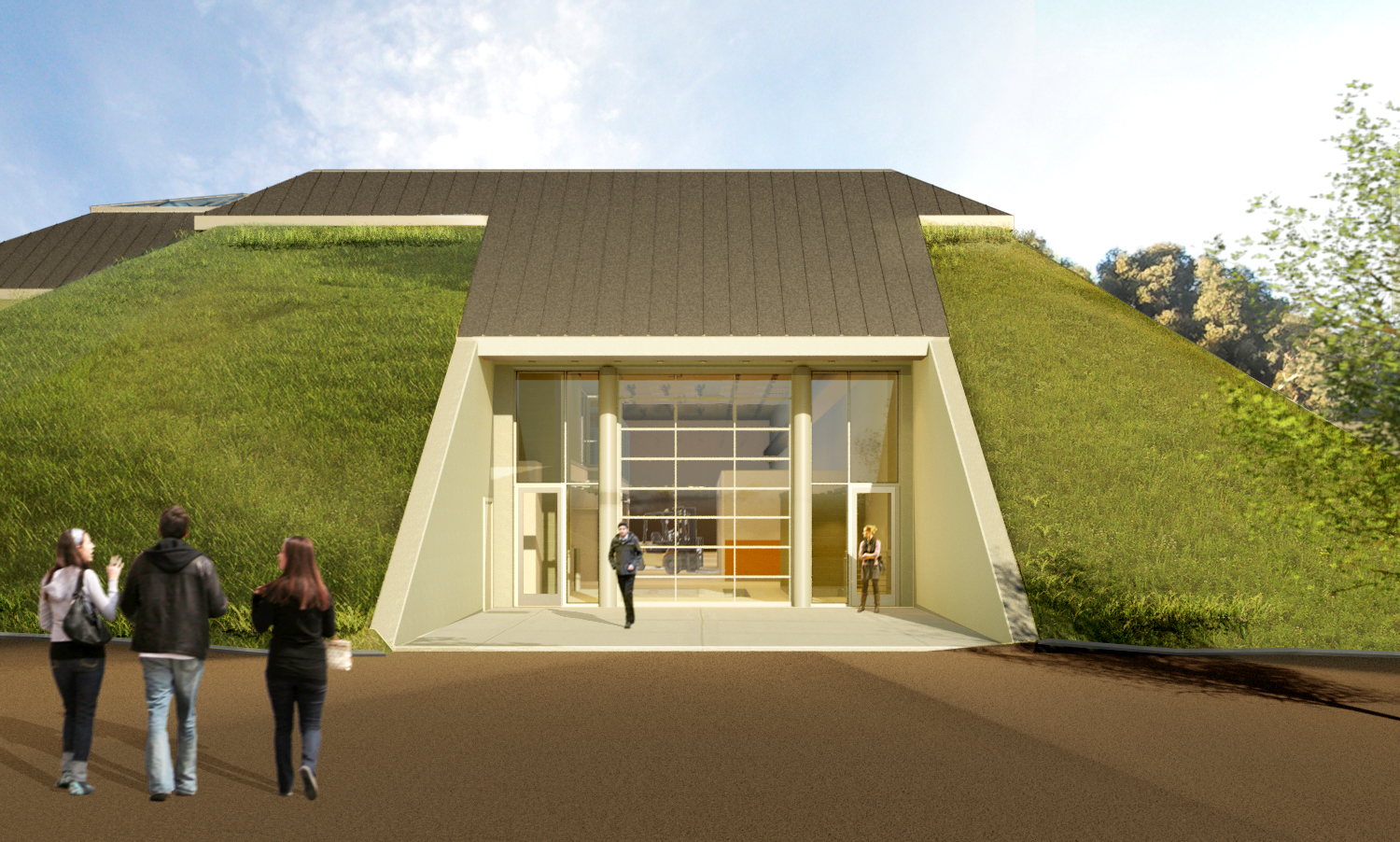 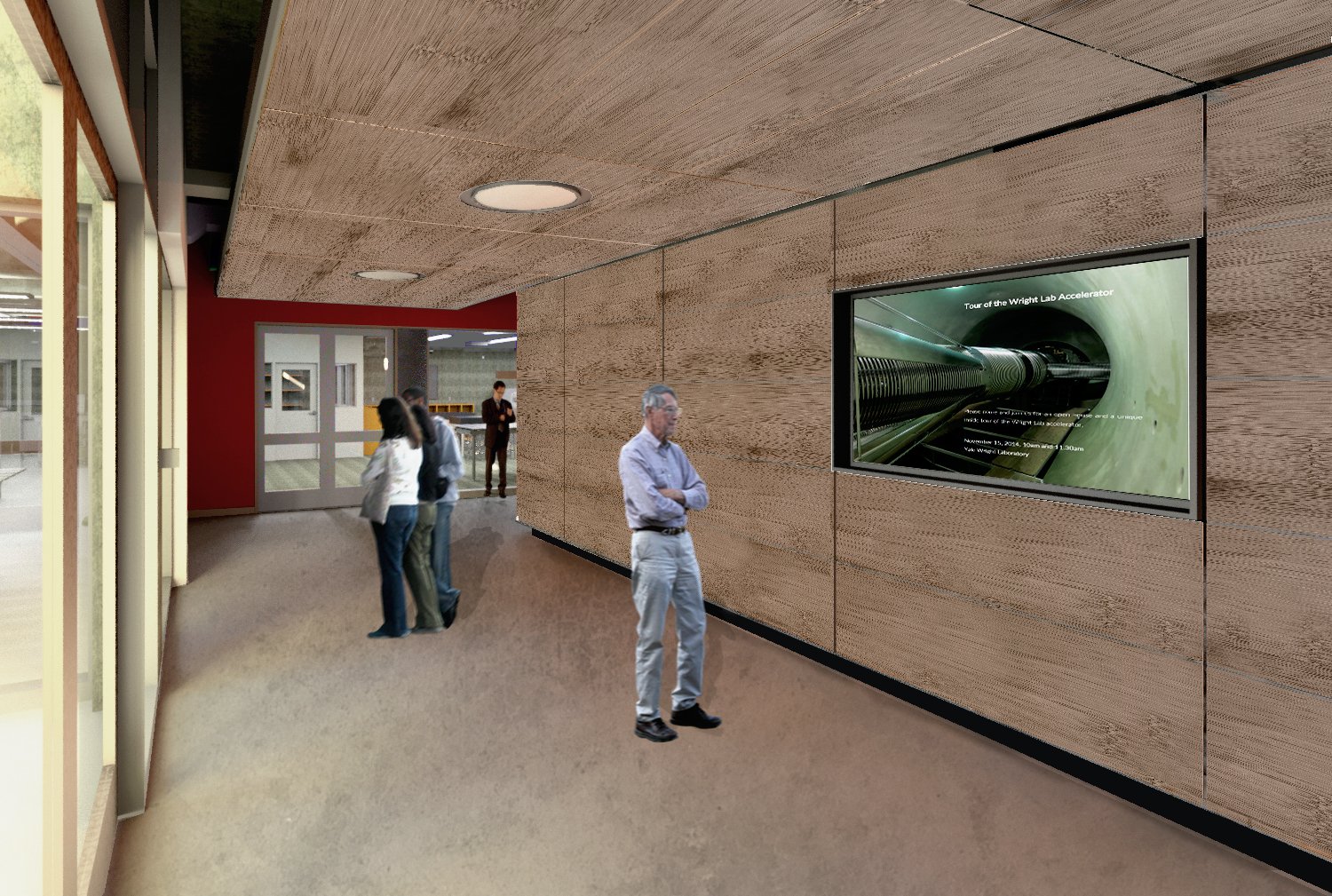 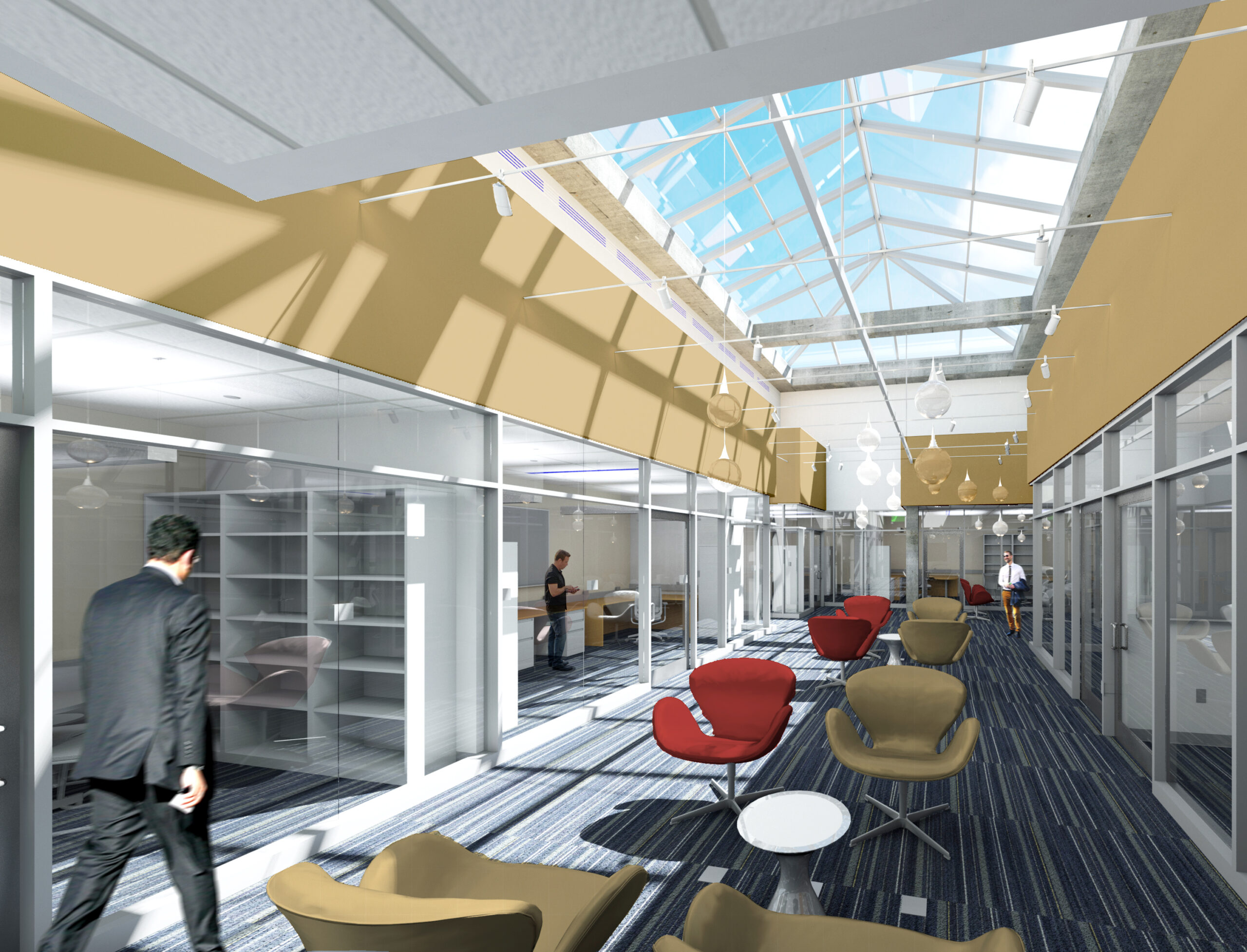 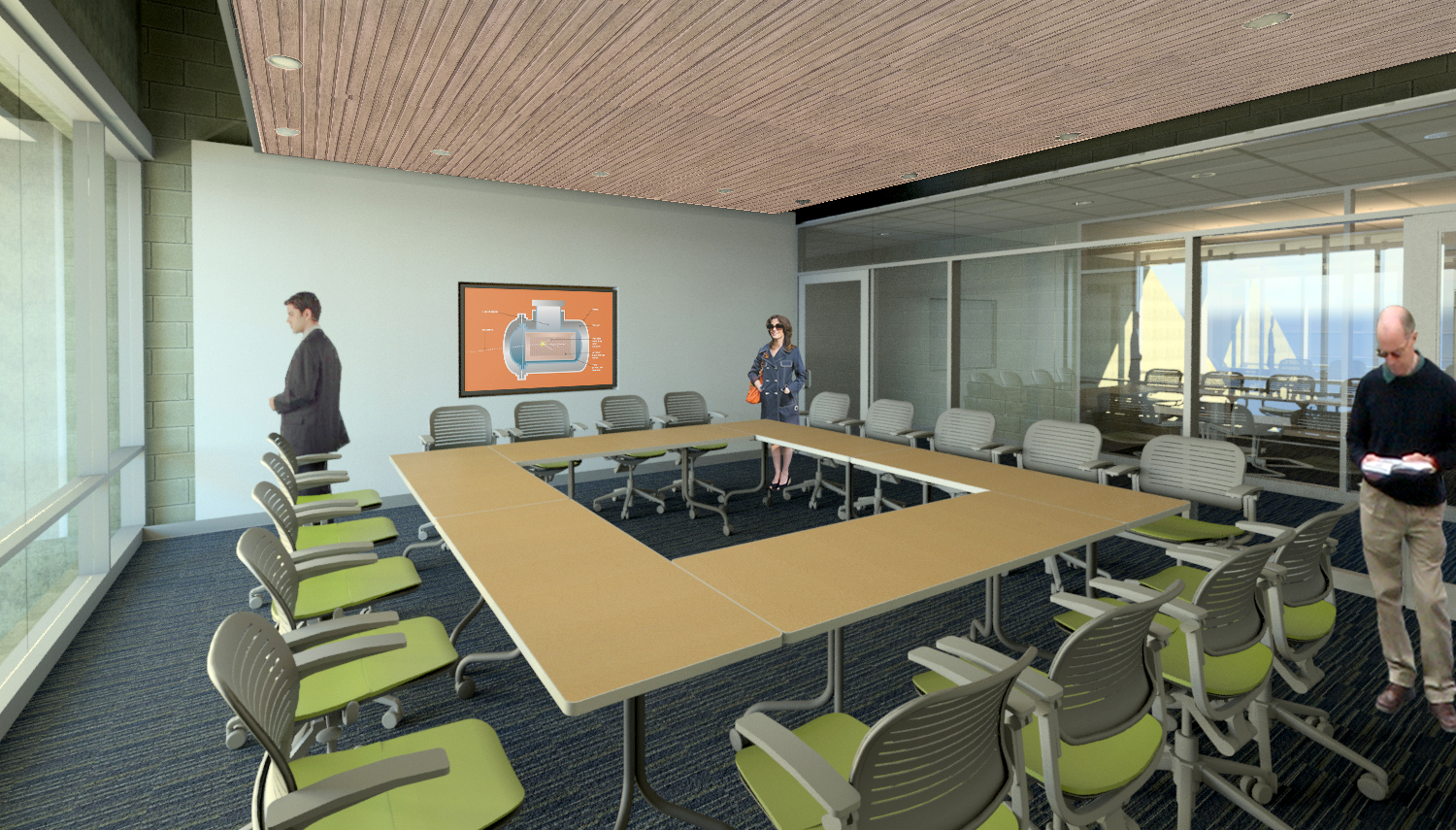 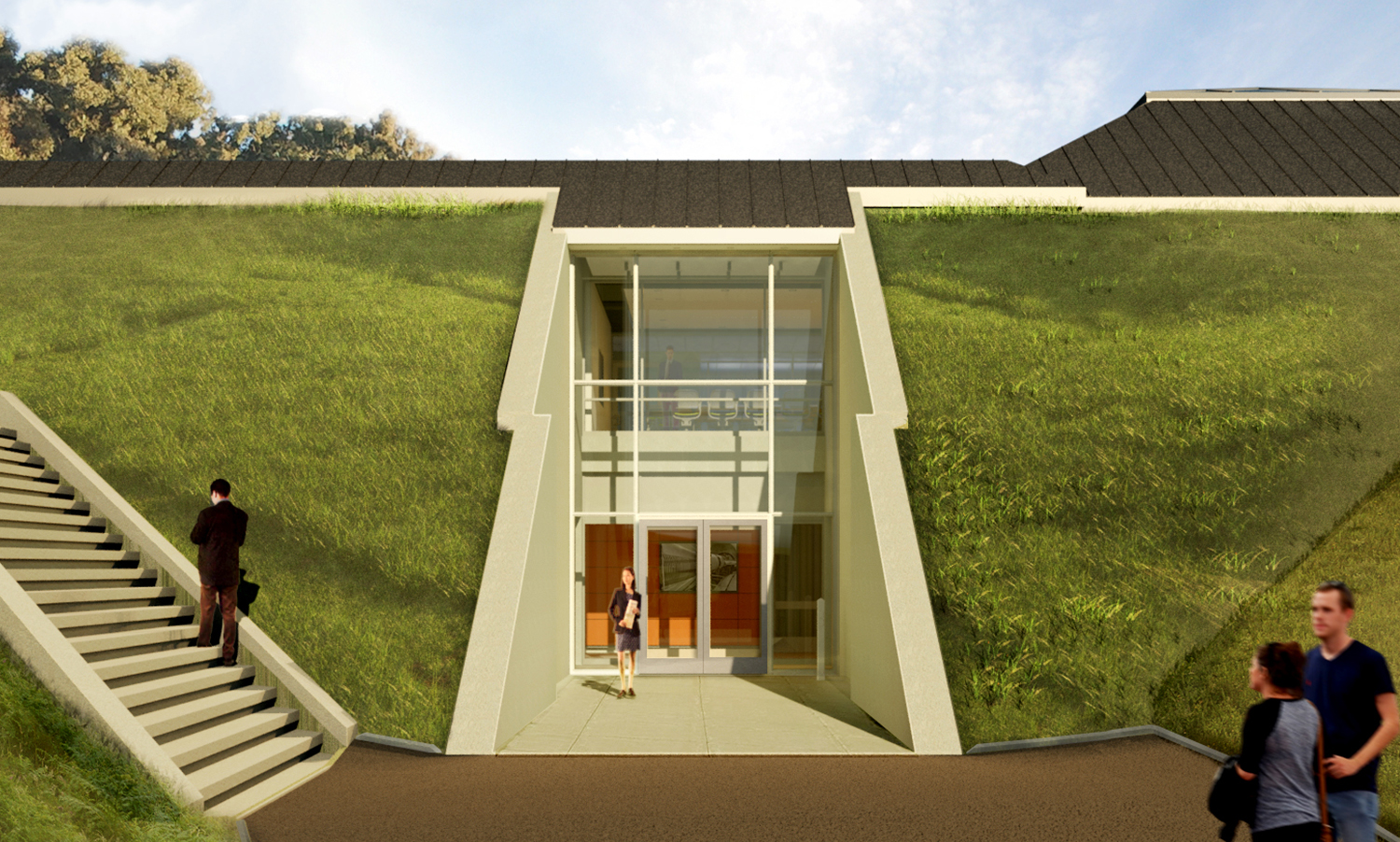 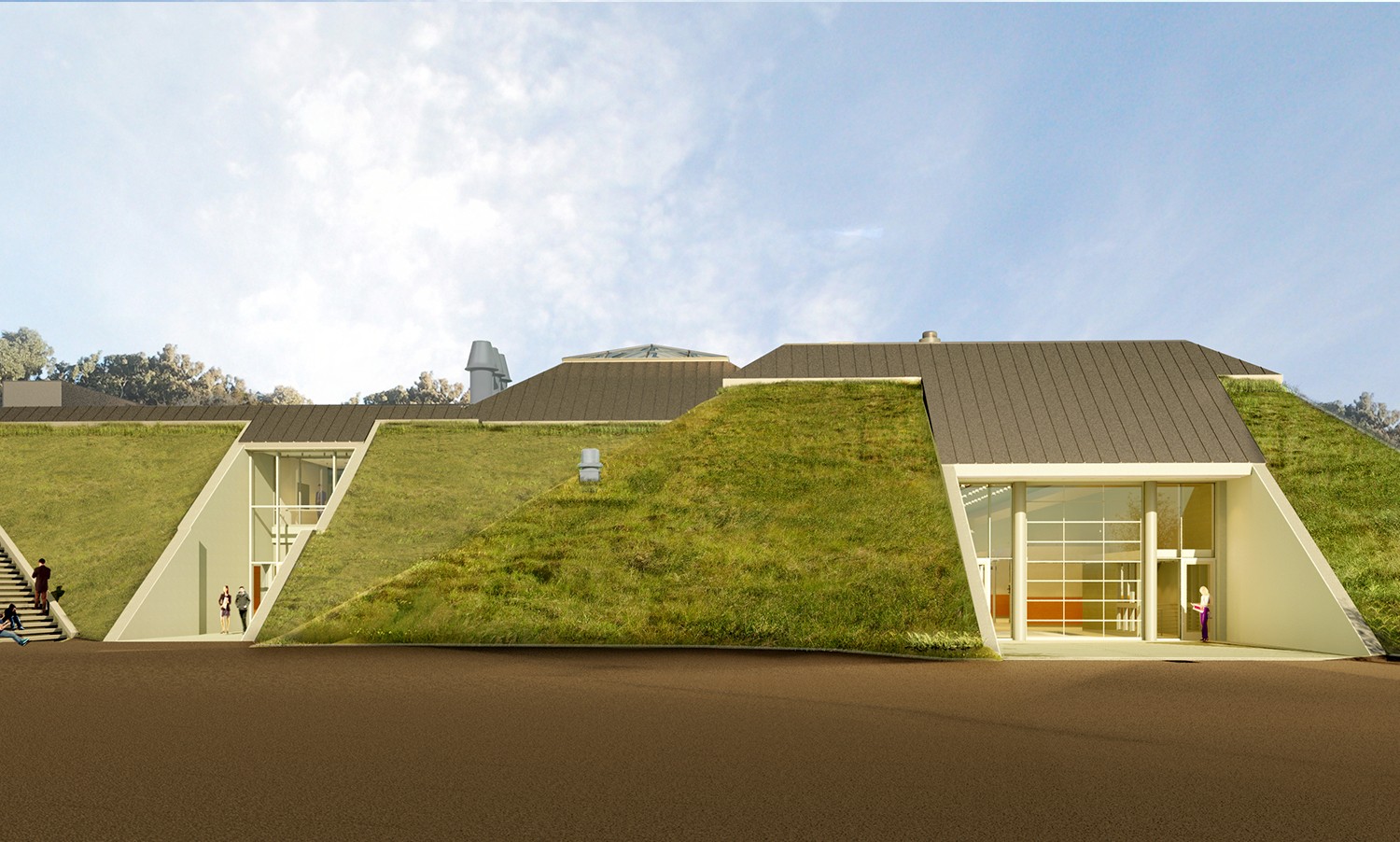 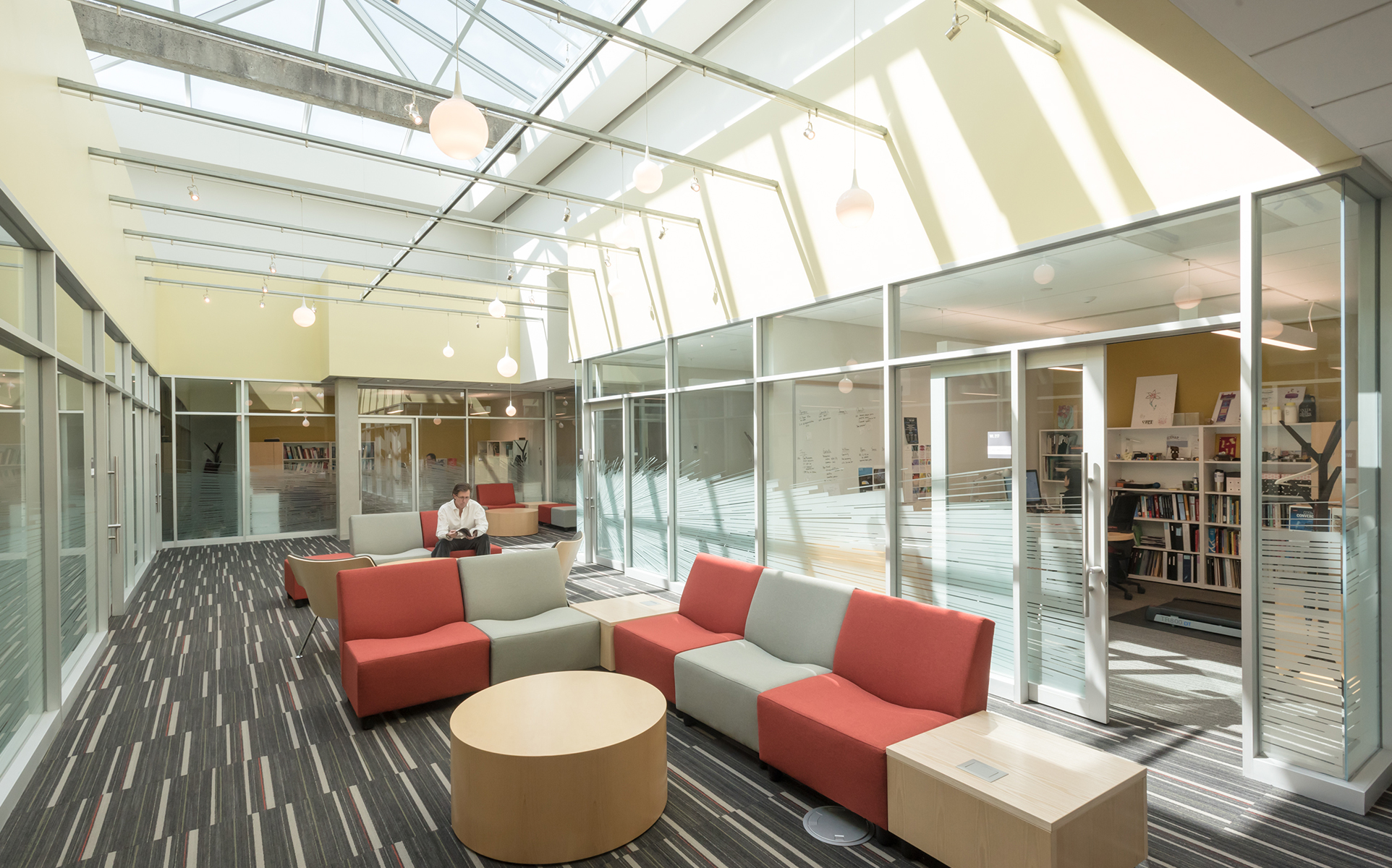 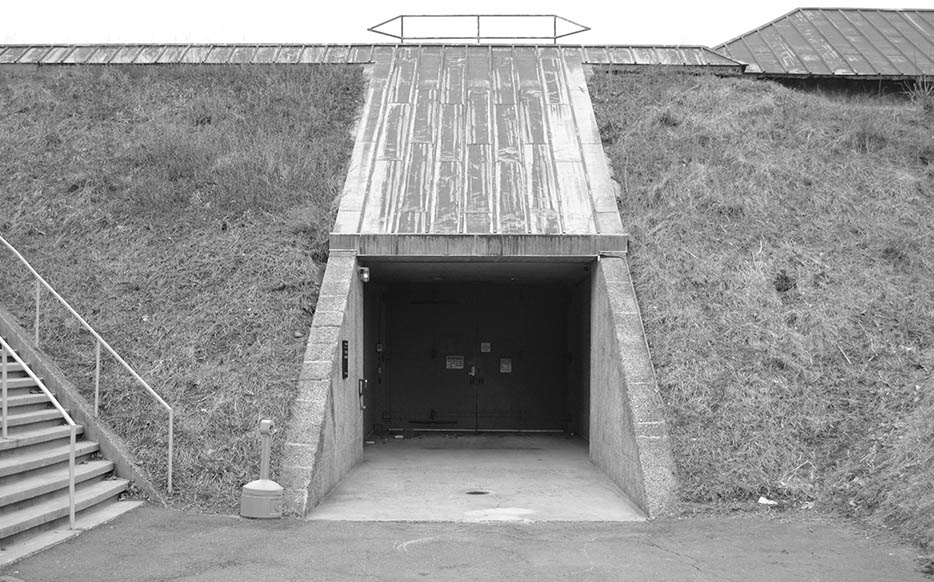 Yale’s iconic particle accelerator — aka a 100-foot long atom smasher — has been retired. Along with it goes the shrouded nature of its landmark underground facility, which has been transformed to reflect the Physics Department’s new mission as an international hub for neutrino and dark matter studies.

What was once a windowless warren of cubbyhole offices and labs is now a series of day lit work, meeting and making spaces. The central part of the building has been opened up to foster interaction among scientists, students, and technical experts, and will host physicists and other researchers from around the world for seminars and master classes.

“This place was designed with synergy, collaboration and collisional frequency in mind.”
– Paul Tipton, Chair of Physics Department, Yale University

“The new Wright Lab is advancing the frontiers of fundamental physics – It investigates questions about the very small and the very big, from elementary particles to the origins of the universe.”
– Karsten Heeger, Director, The Wright Lab

“There is no bigger investment that we plan to make than in science. This is the place where excellent physics will be carried out.”
– Peter Salovey, President, Yale University

Backstory
As the study of physics evolves at Yale, so too one of its pivotal buildings. When Yale installed the Van de Graff particle accelerator in 1987 it was the most powerful of its type in the world, which put the Wright Lab at the center of national physics research. Over the years, as more powerful machines went into use elsewhere, The Wright Lab’s atom smasher’s prominence faded and it was shutdown in 2011 and painstakingly disassembled in 2014.

The new, more physically and symbolically open Yale Wright Laboratory provides critical research and teaching support for training the next generation of scientists, and for developing cutting-edge experiments to advance the frontiers of nuclear, particle and astrophysics.

Context
Known as the Wright Nuclear Structure Laboratory when it was built in 1966, the building is a concrete bunker-like structure covered by a berm on Science Hill, the area of Yale’s campus devoted to physical and biological sciences. The design brings natural light into the building and emphasizes collaboration through transparency. The building serves as a centralized amenity to Science Hill and serves the broader scientific community at Yale University and beyond through the academic and professional machine shops.

Nuts & Bolts
Built in the 1960s, the 52,000-square-foot, two-story physics laboratory is now a state-of-the-art space including specialized laboratories, clean rooms, machine shops, collaboration and meeting spaces, faculty offices, state-of-the-art equipment and infrastructure upgrades. Students and researchers can learn and practice the principles of design and fabrication of scientific equipment in the student machine shop, while the professional machine shop supports research throughout the university, making everything from cages to components for the dark matter detectors.

What You Don’t See
Dark matter! But the instruments and experiments to find and study it will be designed and built here.

Best Use
Meeting your colleagues from Yale’s Antarctica site to probe the invisible universe in broad daylight.