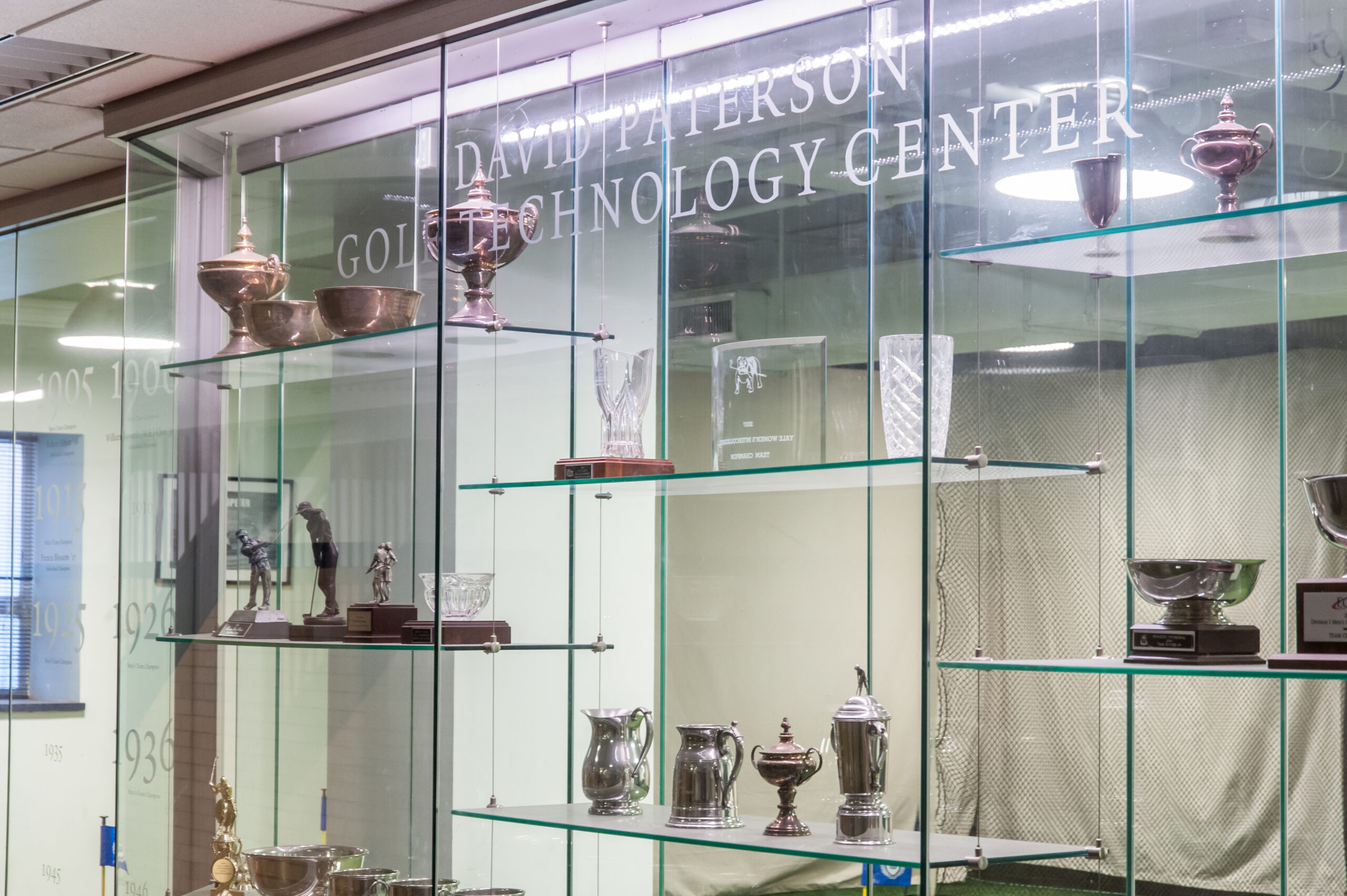 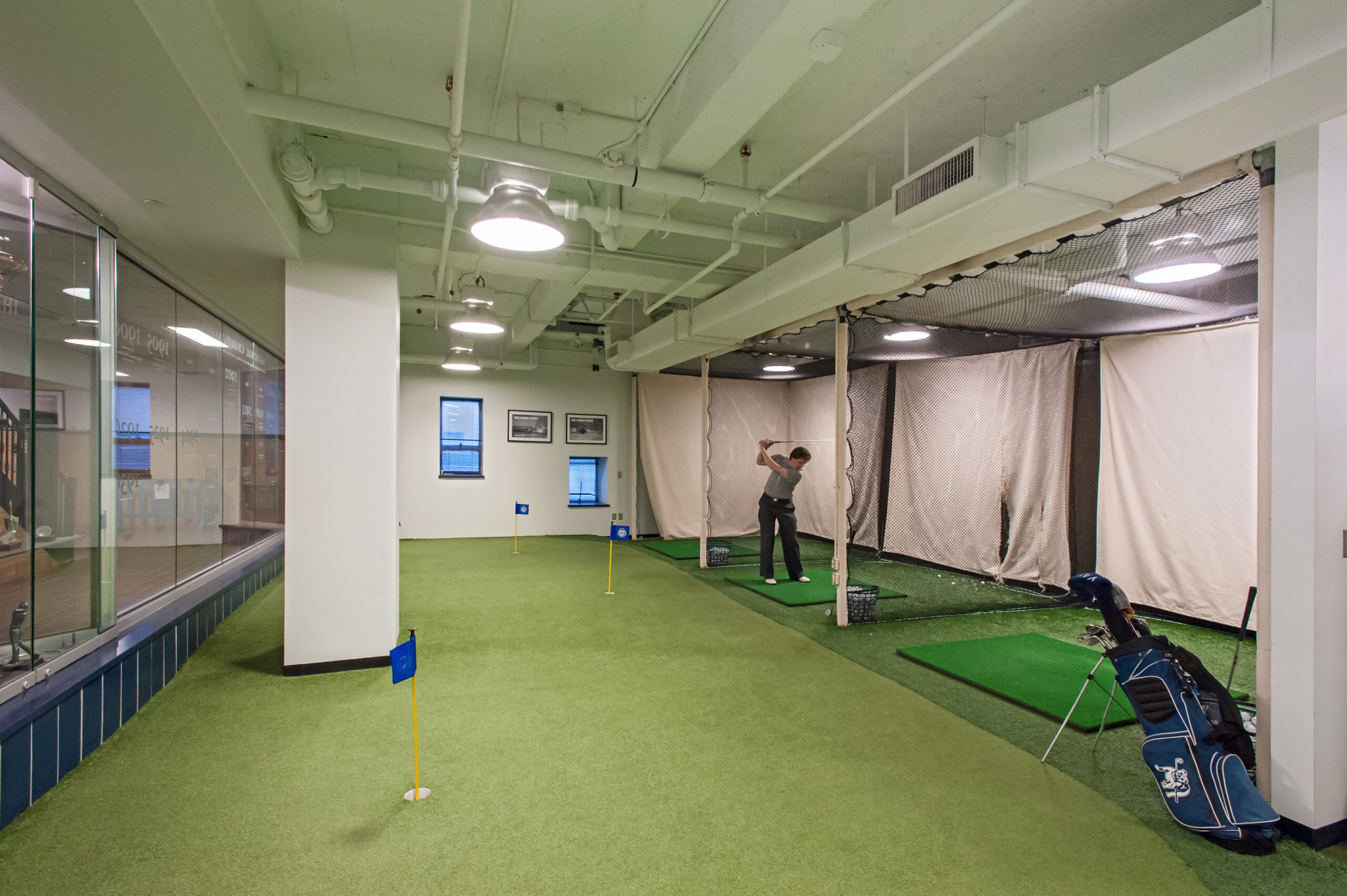 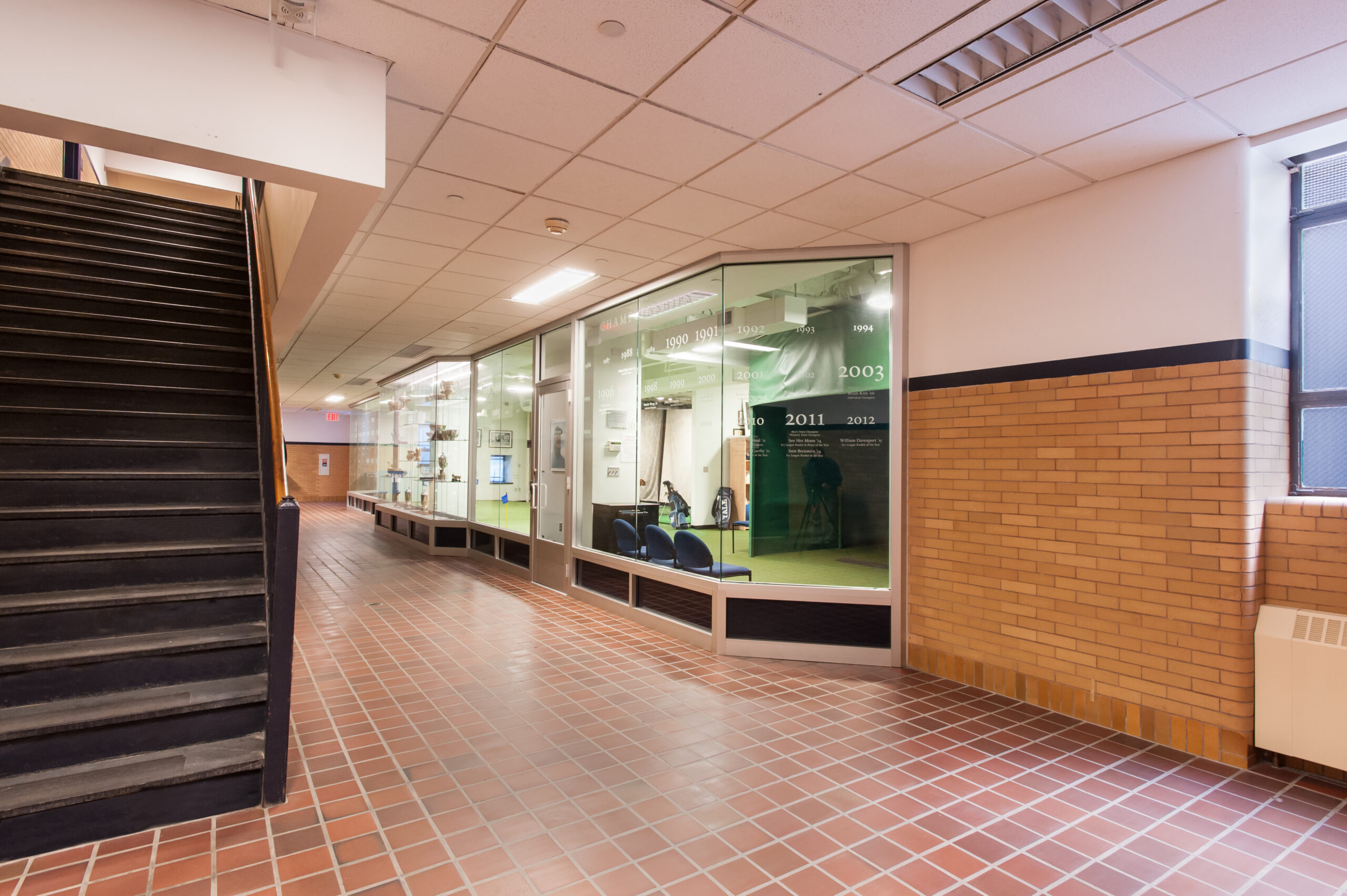 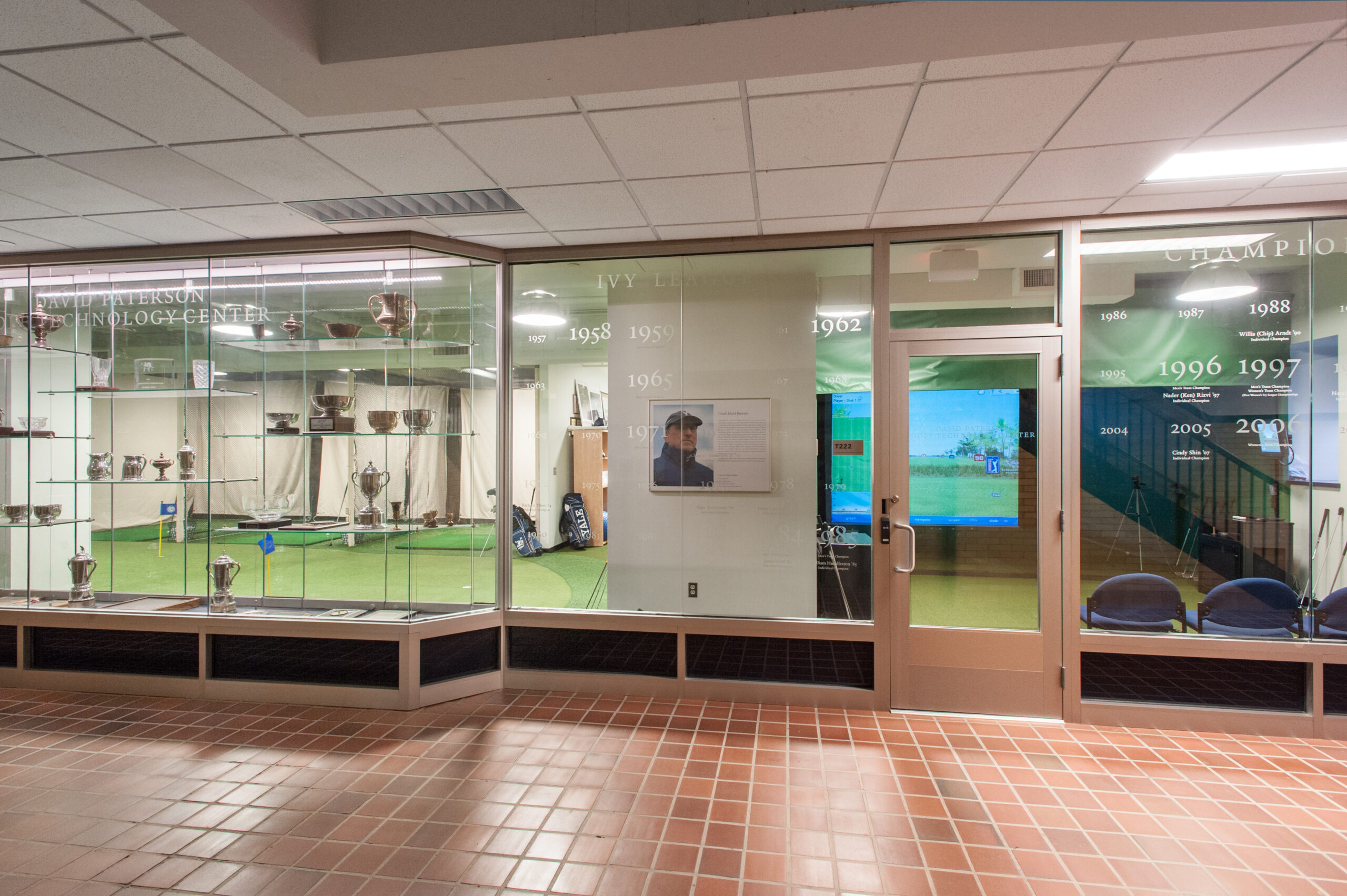 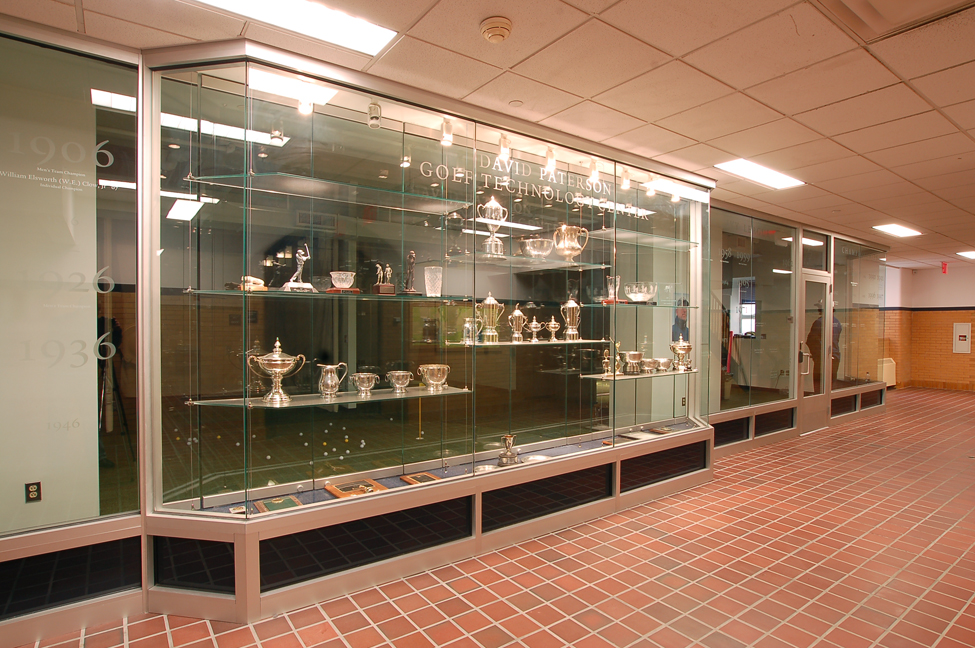 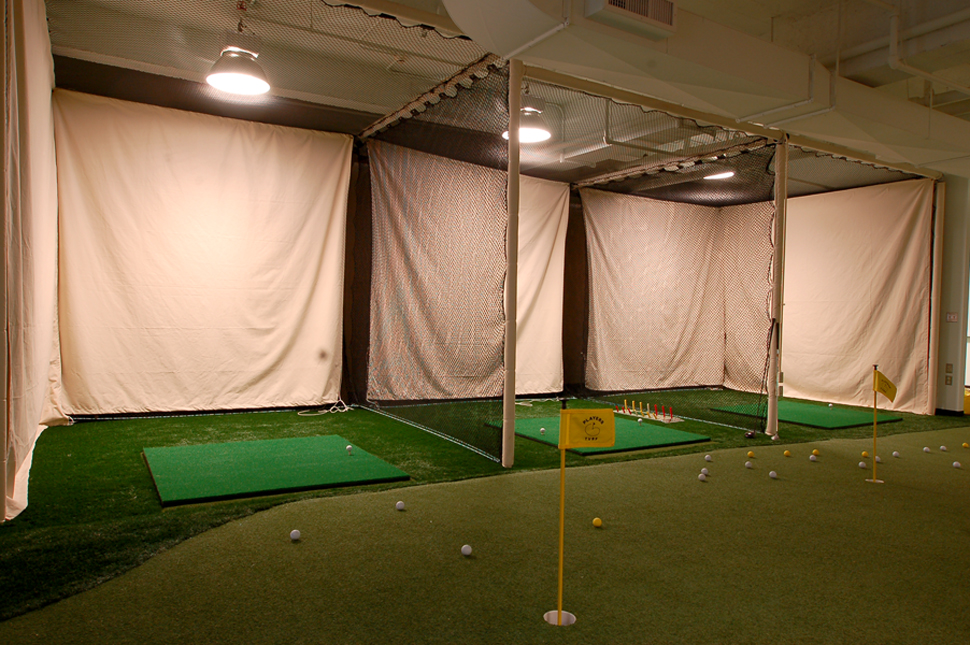 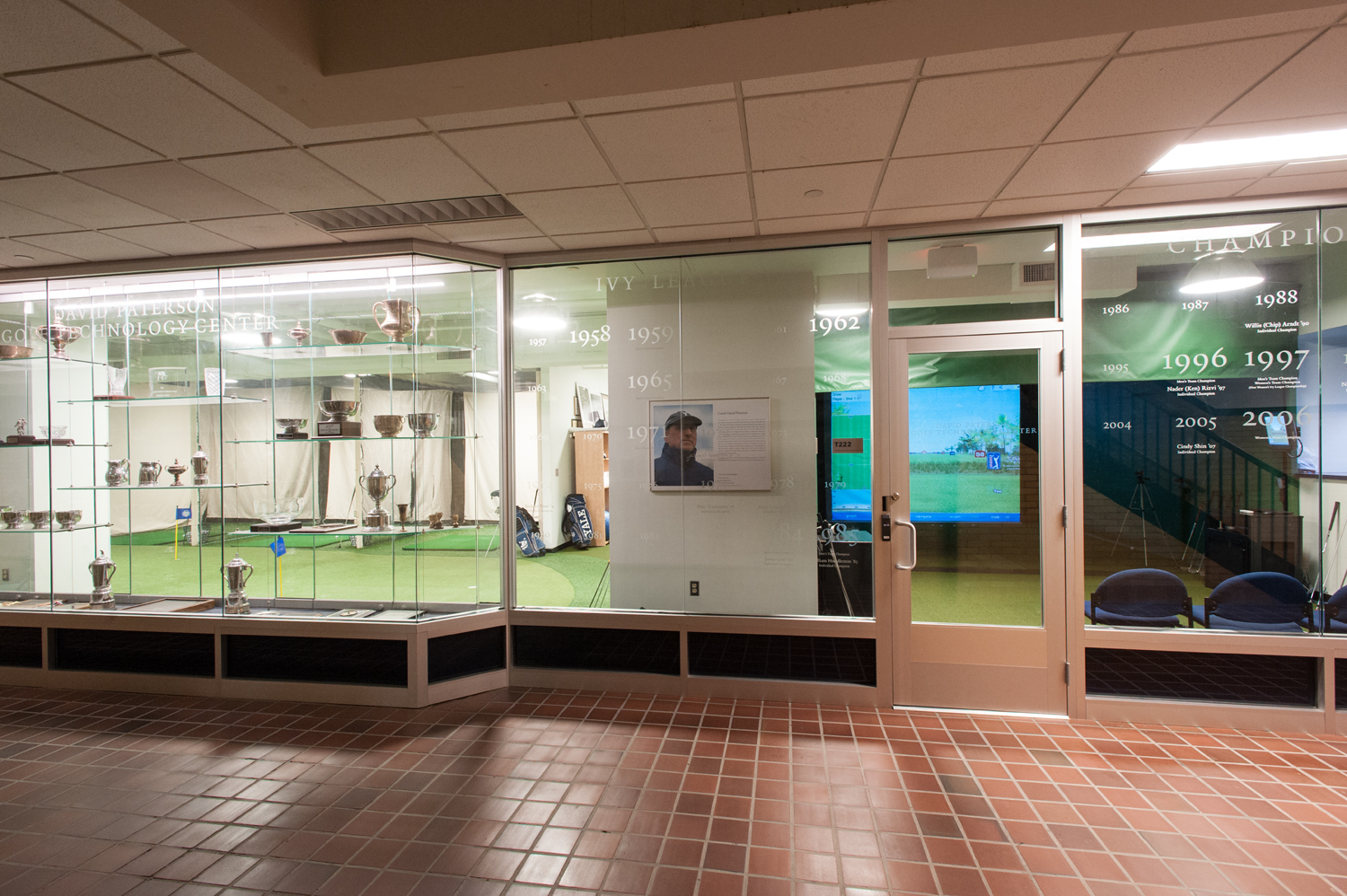 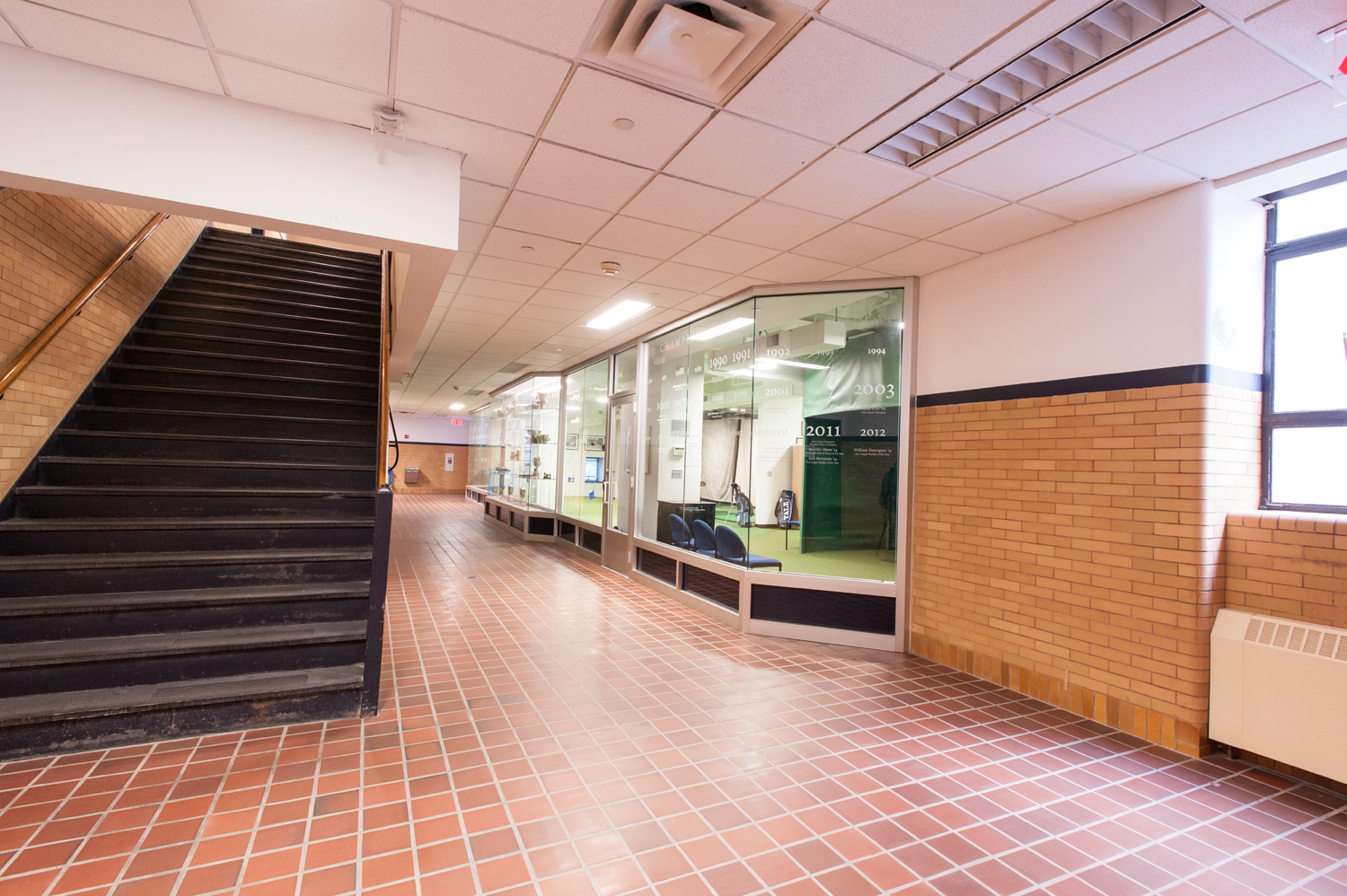 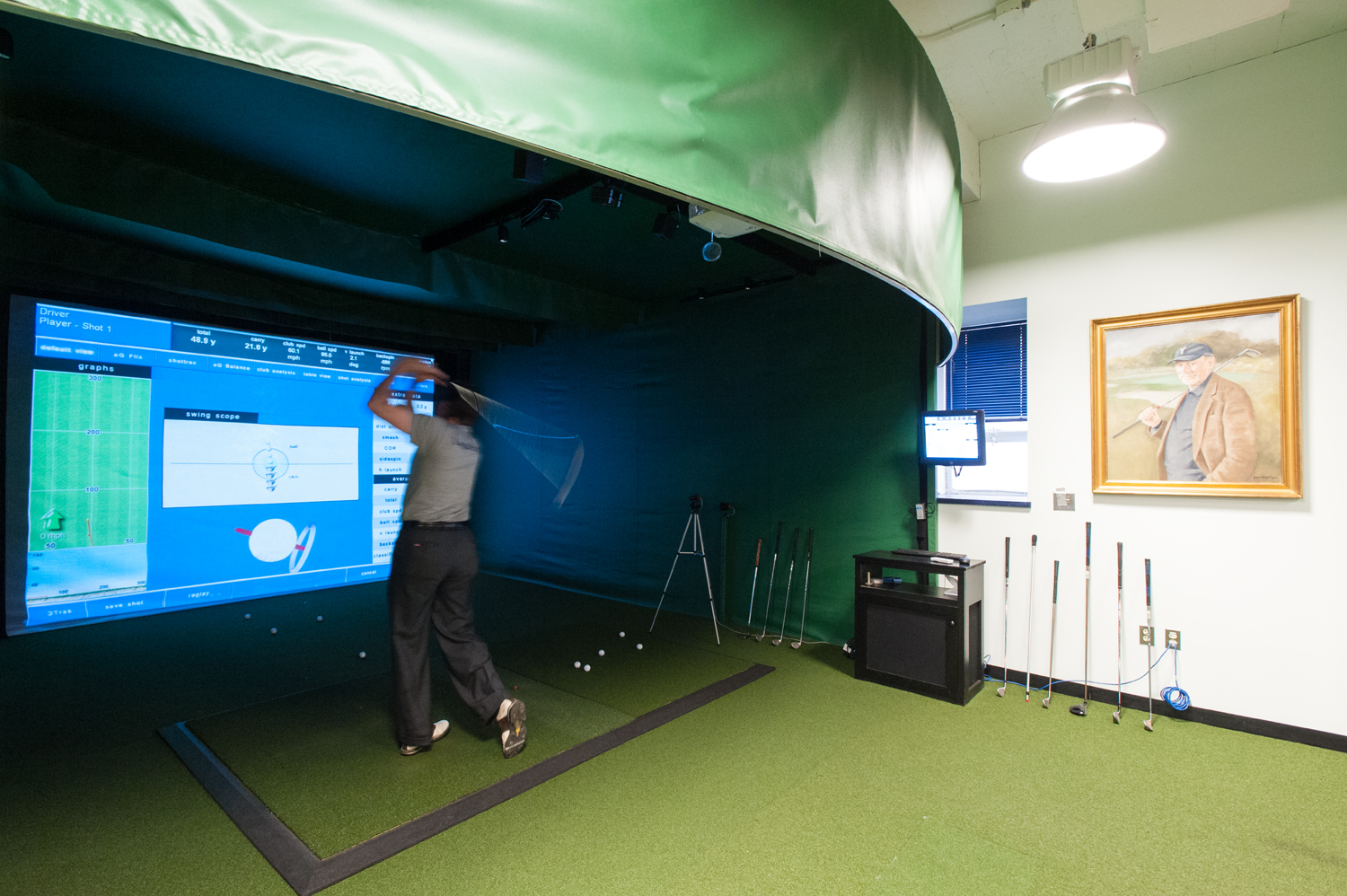 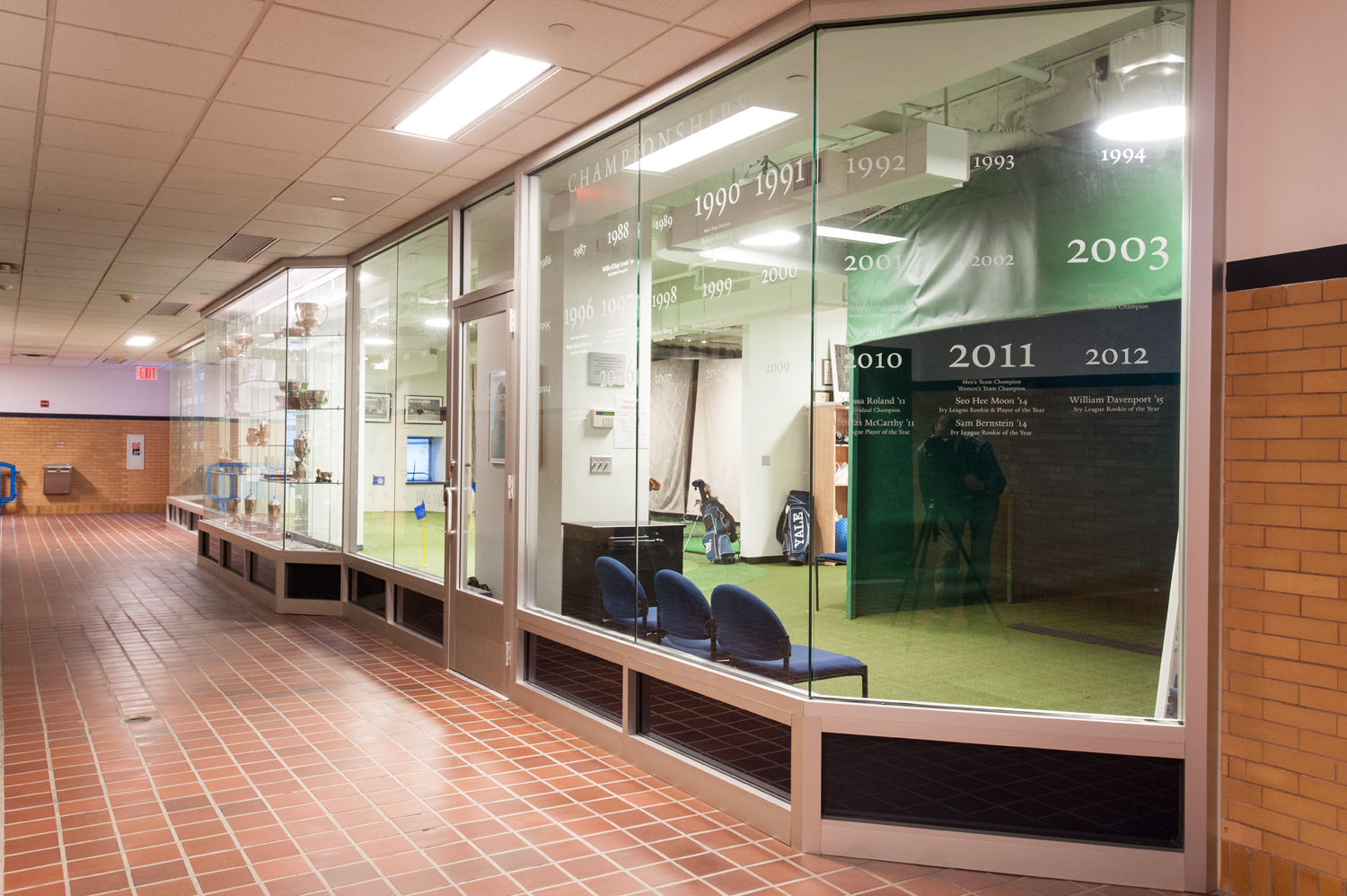 A virtual hole-in-one
On May 4, 2008 the David Patterson Golf Technology Center was ceremoniously dedicated in honor of its namesake, Yale’s longtime golf coach and the driving force behind its creation. Located on the second floor of Payne Whitney Gym, the brightly lit, glass enclosed focal point is the first destination encountered upon entering the second floor from the bank of elevators. In sharp contrast to its staid surroundings, the space it occupies was previously the gymnasium’s towel drop off point.

The facade of illuminated glass doubles as a graphic timeline tracing the century old history of competitive golf at Yale while also prominently displaying winning trophies and important memorabilia. Golfers can practice their swing in one of the four heavily padded “driving” banks, improve their putting on the artificially sloped putting green, and test their skills on any of the many virtually simulated golf courses found throughout the world. The entire facility is covered in various grades of artificial turf, designed and groomed to replicate the natural turf typically found on an outdoor course.

“This is one of the finest indoor centers that exists in college golf. It is a wonderful place for the teams to not only work on their games, but it has enhanced the camaraderie of the players, both among the men’s and women’s teams and between the two teams themselves. They are able to spend the time before or after their workouts hanging out, catching up and listening to music in the docking station. This time spent together does wonders for the team morale and friendship amongst the teams.”
– Colin Sheehan, Head Coach, Yale University Men’s Golf Team

Backstory
Funded by former members of Coach Paterson’s team, the new center is considered to be one of the best indoor collegiate facilities in the country and provides both the women and men’s team with year round training, while it additionally serves as a recruiting tool for prospective talent.

Context
Payne Whitney Gym is a nine and a half story gothic style building that houses more than 12 acres of sports related environs including training centers for crew, gymnastics, swimming, general exercise, fencing, basketball (and now, of course, golf) as well as Yale’s vast collection of sports memorabilia.

Nuts & Bolts
The putting greens are not only “planted” with several kinds of artificial turf, but shaped with a topography made of tons (literally) of process stone, a mixture of crushed stone and sand. Specialists were flown in to create the ground swells, the weight of which has apparently been accommodated by the fortress like structure of the Payne Whitney Gym.

What You Don’t See
Yale’s 18 hole Golf Course – It lies on the outskirts of New Haven and is considered one of the world’s finest and most challenging courses. The technology center had to live up to that reputation, and every effort was made to do so.

Best Use
Golfing at Pebble Beach in the morning, Saint Andrews in the afternoon and being home in New Haven in time for dinner.